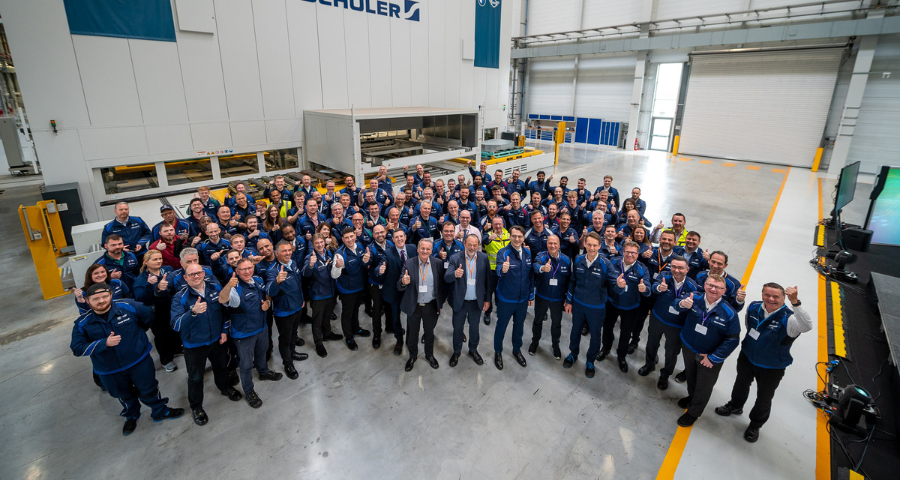 BMW Group board member for production, Dr. Milan Nedeljković, has formally opened a new automated steel pressing facility at the company’s Swindon plant. The facility, built by McLaughlin & Harvey, contains a  new press that will produce steel panels for the MINI plant in Oxford at twice the rate of the old equipment which it replaces, with the steel blanks and finished panels handled by a new fleet of Automatic Guided Vehicles (AGVs).

“Plant Swindon now has the latest press-shop technology and is ready to take its performance to the next level, as a vital member of BMW Group’s international production network.”

‘McLaughlin & Harvey is delighted to have been involved in such an important part of BMW’s continuing commitment to the Swindon Plant. The feedback, on the now operational facility, from both BMW management and staff, has been so positive and shows the clear operational improvements the new building has made to their business.  This is a testament to the commitment and excellence of the whole team involved in the project. For McLaughlin and Harvey, the Press Plant Building has been a great success from start to finish and represents the cornerstone of our strong ongoing relationship with BMW.’

“The completion of the Press Hall project at BMW Swindon was, whilst a challenging scheme, a tremendous achievement for all involved from the Client to the supply chain. Considering the pandemic during construction, the project remained a success due to the fantastic collaborative relationship we forged with BMW.”

The building has numerous environmental features including water harvesting from the roof to provide water to all non-drinking water supplies. There is also a system which uses the heat from the press hydraulics to heat the main hall. This along with smaller touches such as LED lighting and the long glass roof windows running down the centre of the building have a significant impact, creating a light bright working environment, reducing the reliance on artificial light and contribute significantly to achieving energy saving and sustainability targets.

The construction of the new building started in June 2019, after the demolition and the clearing of ‘A' Building on the Swindon site. During the construction of the 36m wide, 210m long, 25m high building, the team has managed the challenge of the COVID-19 restrictions and an enforced four-week shutdown during the first lockdown.