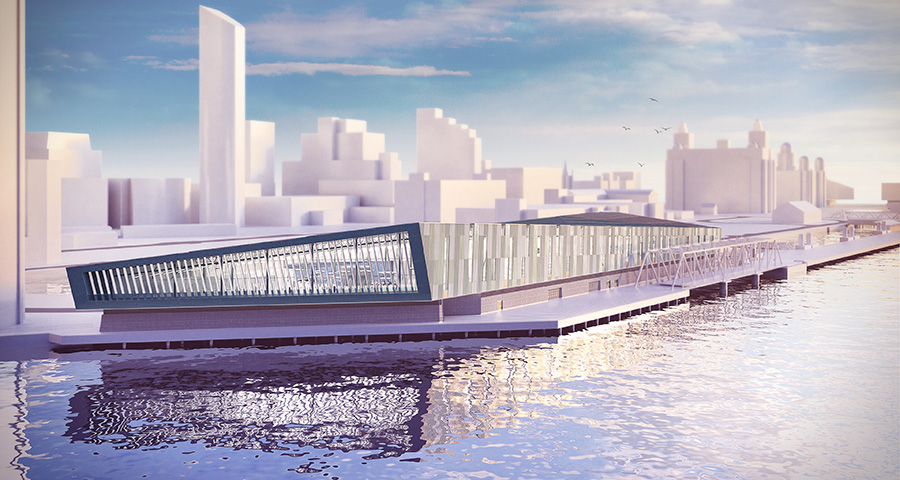 The new facility will enable the city to welcome the world’s biggest cruise ships to its UNESCO World Heritage listed waterfront.

The first stage will consist of supporting the council’s appointed design team, led by Ramboll UK, to finalise the design and construction method, including completing enabling works such as the controlled dismantling of the existing derelict Princess Jetty, which has been gifted to the city by Peel Land and Property.

They will also establish the final construction costs by inviting competitive sub-contract prices for each package of works in advance of the second stage main contract award, whilst designing out construction risks. McLaughlin & Harvey will also be fully supporting the Liverpool in Work programme to provide and promote engagement with local subcontractors and suppliers, and offer local employment opportunities.

The main contract works involve the construction of the new Cruise Passenger Terminal on a suspended deck structure at the Princes Jetty site and the erection of a vehicular linkspan bridge and pedestrian bridge / walkway to connect the new terminal to the existing landing stage.

It also includes improvements to the existing landing stage, including modification of existing buildings such as the lower cruise terminal reception building, relocation of the building on the northern end of the pontoon and creation of an ancillary buildings for storage and use by operational staff; improvements to Princes Parade to incorporate pedestrian crossing facilities, provision of terminal parking, pickup and drop off facilities, and supporting development.

This year Liverpool will welcome more than 57 vessels, with 100,000 passengers and crew, but the council wants to capitalise on the cruise boom by creating a state of the art passenger and baggage facility, complete with passport control, lounge, café, toilets, taxi rank and vehicle pick up point, to cater for Liverpool’s growing appeal in the cruise industry. The current terminal generates more than £7m a year to the city’s economy.

The outline planning application for the new facility is expected to be heard by the council’s Planning Committee in April 2018. If approved, site preparation at Princes Dock, in Liverpool Waters, is expected to start in October 2018.

The council is also in the process of promoting a Harbour Revision Order through the Harbour Authority to construct the new terminal in the River Mersey.

Further planning applications could potentially include supplementary projects with a new 200 room hotel and 1,700+ multi-storey car park to enhance the city’s capabilities in handling the next generation of turnaround cruises, which can carry up to 3,600 passengers.

Mayor of Liverpool, Joe Anderson, said, “I’m delighted that we’ve appointed such a renowned company as McLaughlin & Harvey to undertake this phase of design work of our new cruise facility. This is a major step forward for what is one of the city’s most important regeneration projects of this decade and is vital to growingLiverpool’s tourism economy. We want to provide the next generation of super liners and their passengers a world class welcome with a five star experience. A new cruise facility will also be a huge boost to our plans to regenerate the North Liverpool docklands and create thousands of new jobs which is why we’re putting together the best team of experts to ensure we build this facility to the very highest standards.”

McLaughlin & Harvey Contract Director, John Mariner, said, “We are delighted to have been appointed to deliver this prestigious and iconic project on the Liverpool waterfront and look forward to working collaboratively with Liverpool City Council’s team.”

Although the proposed multi-storey car park has been earmarked for the new cruise facility, the council is reviewing locations north of Leeds Street so it could also support initiatives around the Ten Streets creativity district.

The council, which recently held a two day public consultation on the scheme, is also investing a further £32m in upgrading the A565 to support the new cruise facility and north docklands and is also gearing up to create a £20m link road to extend Leeds Street to the waterfront to support a new £30m Isle of Man Ferry terminal.

Relocating the cruise terminal will also enable the council to remodel The Strand by removing junctions, such as the one servicing the current facility, that stem the flow of traffic along the key waterfront route.

Liverpool City Council, which is currently overseeing £14bn worth of regeneration projects, is also carrying out further maritime and infrastructure investigations, environmental impact assessments and surveys and is working closely with Peel Land and Property as the gifted Princes Jetty sits within its £5.5bn Liverpool Waters scheme.