McLaughlin & Harvey has started work on the construction of the Epping Forest Shopping Park, Loughton. 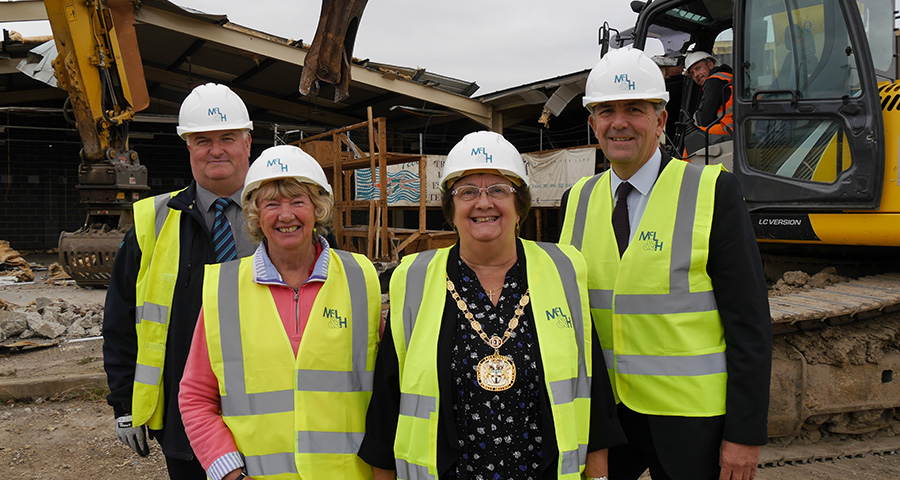 To celebrate the start of works, Councillor Jeane Lea, Chairman of Epping Forest District Council and Councillor Anne Grigg, Cabinet Portfolio Holder responsible for the council-owned scheme, visited the site to meet with our Construction Project Manager Alex McCalley and members of the workforce for a tour of the site. The Councillors were also accompanied by the Council’s Deputy Chief Executive and Director of Neighbourhoods, Derek Macnab.

The site is now well underway with demolition works to the former council depot buildings. The adjoining site, bought by the council previously, is now clear with excavations already taking place where surface water storage tanks are to be installed.

Once completed, the Shopping Park will potentially host some of the biggest names in retail including Next, Aldi, TK Maxx, Pets at Home and Hobbycraft. Around 200 permanent new jobs will be created, while rental income from the park will help Epping Forest District Council provide public services to local residents and maintain one of the lowest Council Taxes in Essex. There will be on-site shopper car parking for up to 350 cars as well as excellent public transport links a short walk away at Debden Underground Station. With a footprint of 94,000sqft (or almost 150,000sqft taking account of mezzanine floors) there will be plenty of retail space with something for everyone including children with Smyths Toys expecting to be a big draw for families.

While on-site, Councillor Grigg commented, “I was delighted to see the progress. McLaughlin & Harvey has made a cracking start. The site is clean and the demolition work is being carried out with meticulous attention to safety. Now the barriers between the old council depot and the adjoining site have been removed you start to get a real perspective on the size and scale of the shopping park. It will be a fantastic asset and a tremendous boost to the local economy.”

During the tour, Alex McCalley explained some of the ways in which McLaughlin & Harvey is working to minimise disturbance to neighbours. He said, “Years ago we would have had hundreds of lorries coming on and off-site as we transported the thousands of tonnes of hardcore rubble. These days we are much more environmentally friendly. Nearly all the rubble will be recycled into the foundations of the new retail park. We are using better methods of pile driving, drilling our way down to the London clay rather than the old method of banging away with the pile-driver. We are also making contact with our neighbours, keeping people informed and setting up those vital lines of communication that let everyone work together.”

We were delighted to hear that Councillor Jeane Lea was also very impressed. She added, “McLaughlin & Harvey are one of the most experienced retail park developers. They have worked with some of the biggest companies to deliver large schemes. I would like to thank Alex and his team for such an informative tour and look forward to being invited back to review progress.”

We expect construction to take around 40 weeks, meaning the first shoppers should be through the doors next summer.