McLaughlin & Harvey has successfully completed the West Stand roof of the £45 million Ashton Gate rebuild, which included installing the largest roof truss of the project. 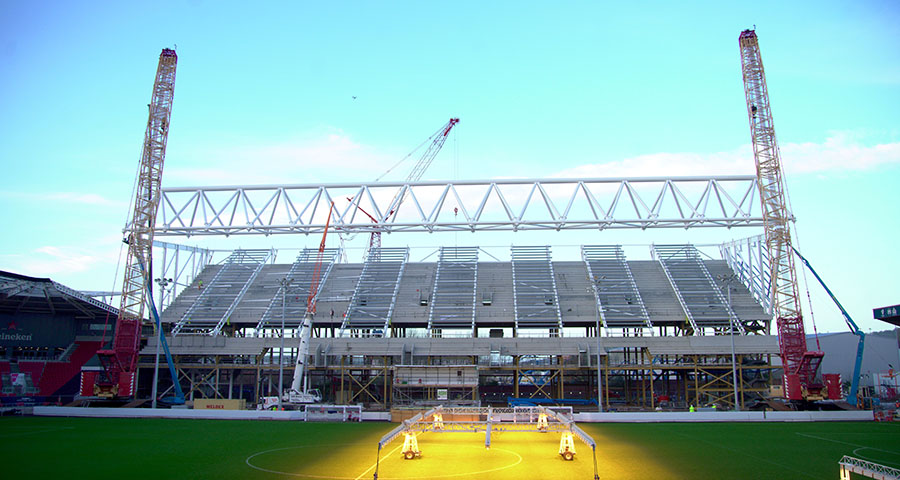 Weighing 220 tonnes, the West Stand truss roof was built at ground level, and is over twice the size of the truss lifted onto the Dolman Stand in April 2015.

The roof truss, measuring 108m long, 7m high and 6m wide, was positioned using two 600 tonne crawler cranes in a tandem lift to raise the steelwork on top of a pair of pre-erected columns.

The truss was restrained by seven pairs of roof rafters weighing 20 tonnes each, which were pre-assembled on a hinge mechanism allowing the rafters to be swung up and attached to the truss using a 25 tonne crawler crane behind the stand.

The installation of the 108m truss signifies the West Stand reaching its highest point of 37.05m, now towering above the South Stand standing at 19.86m by comparison.

McLaughlin & Harvey is currently in phase three of the project which has consisted of the demolition of the old Williams Stand which was replaced with the two-tier stand that will hold 11,000 people. With the truss and roof structure in place, work on the lower tier of the stand will now get underway.

Mike Henderson, Operations Manager for McLaughlin & Harvey said, “A lift truss of this size meant there was a lot of careful planning. Firstly, we brought all the separate truss sections down from Scotland where it was manufactured, and pieced it together on the pitch before it was ready to be lifted. There was a lot of careful weather watching but luckily we had perfect conditions which allowed us to get the truss up in the air and erect the full roof structure in one day.”

The stadium has remained open during the rebuild of Bristol City and Bristol Rugby’s ground and is expected to be completed summer 2016.