London Luton Airport (LLA) has confirmed McLaughlin & Harvey will be the principal contractor on the redevelopment and expansion of the airport terminal. 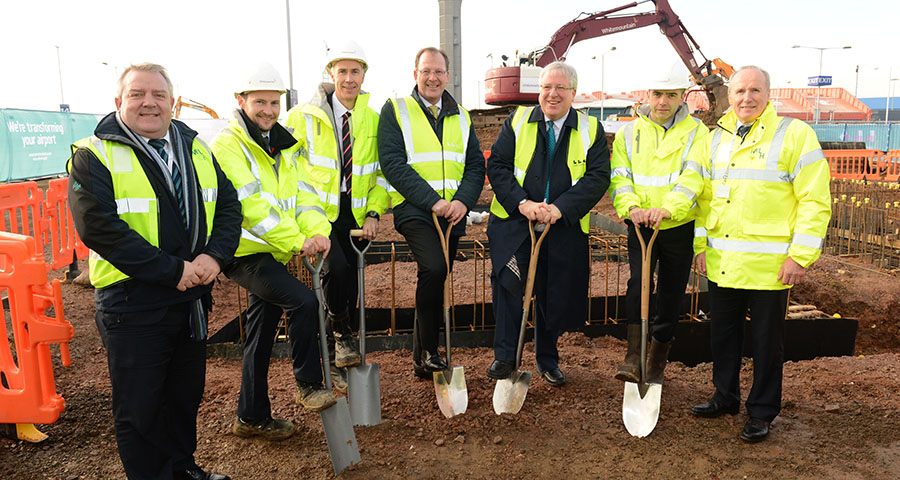 The appointment was announced on the day the Secretary of State for Transport, Patrick McLoughlin MP, visited London Luton Airport to mark the official ground-breaking of the project. A recent report by independent consultancy Oxford Economics predicts the works will add an extra 10,000 jobs and £1billion per year to the economy by 2030.

The transformation now underway at LLA will not only significantly improve the experience for passengers, but also increase annual capacity by 50% from 12 million to 18 million passengers by 2020. LLA saw the fastest rate of passenger growth of all major London airports in 2015, up 16.9% in its busiest year on record.

McLaughlin & Harvey, whose previous infrastructure experience includes projects at Aberdeen, Prestwick and George Best Belfast City airports, will be responsible for delivering the terminal redevelopment. The work will see the internal layout significantly expanded and remodelled to increase capacity. When fully complete in 2017, the redevelopment will deliver:

Nick Barton, CEO of LLA, said, “The appointments of McLaughlin & Harvey and Buckingham Group Contracting, alongside Whitemountain, represent a significant milestone for LLA. With construction now well underway, passengers will quickly see the airport being transformed. As the Transport Secretary made clear at today’s ground-breaking event, expansion at LLA is strategically vital to ensure that we can meet rapidly rising demand for air travel in the SouthEast. Our £110 million transformation is also set to give a huge boost to the local economy and will create thousands of new jobs for local people.”

David Larmour, Construction Director at McLaughlin & Harvey, said, “McLaughlin & Harvey is delighted to have been awarded this prestigious contract in what is one of the UK’s top airports. The works, which are to meet the increased demand from passengers, will last approximately two years and will reorganise the existing facilities and add additional space to retail and airside passenger capacity.”