The 106m Dolman Stand roof truss has been successfully lifted into place as part of the Ashton Gate rebuild by McLaughlin & Harvey. 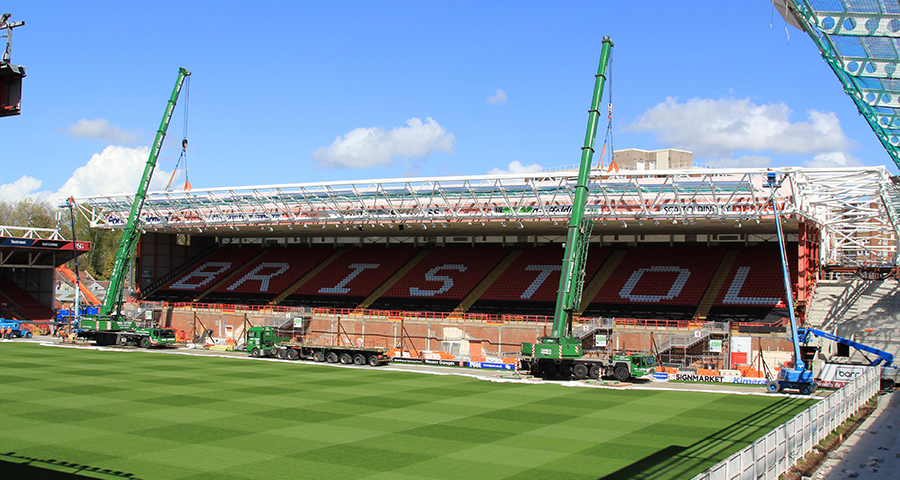 Weighing 75 tonnes, the roof extension was built at ground level over the past few weeks before two 200 tonne cranes were used to lift the steel truss into place.

The lifting of the roof truss is one of the most complicated parts of the rebuild of Bristol City and Bristol Rugby's ground to-date.

Mike Henderson, Operations Manager for McLaughlin & Harvey said, "Today has been a landmark event. The design has had to take in a lot of difficult parameters. From working with the existing Dolman roof to the new South Stand, we've had to work tight tolerances of 10mm at each end of the truss. When you consider that it is 106m long and weighs 75 tonnes it's not an easy piece of steel to slot into place, but it was a momentous occasion to see that it has today."

Bristol Sport Chairman Martin Griffiths said, "It's been a big week for the stadium. Last Wednesday we saw the gap close in the South Stand and seating being fitted, today the lift of the Dolman roof truss. It was quite an incredible feat of engineering to see it slot seamlessly into place. Fans coming to this weekend's games at Ashton Gate will really start to get a sense of what this stadium is going to become."

Works have been on-site since July last year. Phase one consisted of the demolition and rebuild of the South Stand, while phase two involved the remodelling of the Dolman Stand to include an extended roof and new lower tier.

Phase three will start this summer, and will see the Williams Stand demolished and replaced with a two-tier stand that will hold 11,000 people.