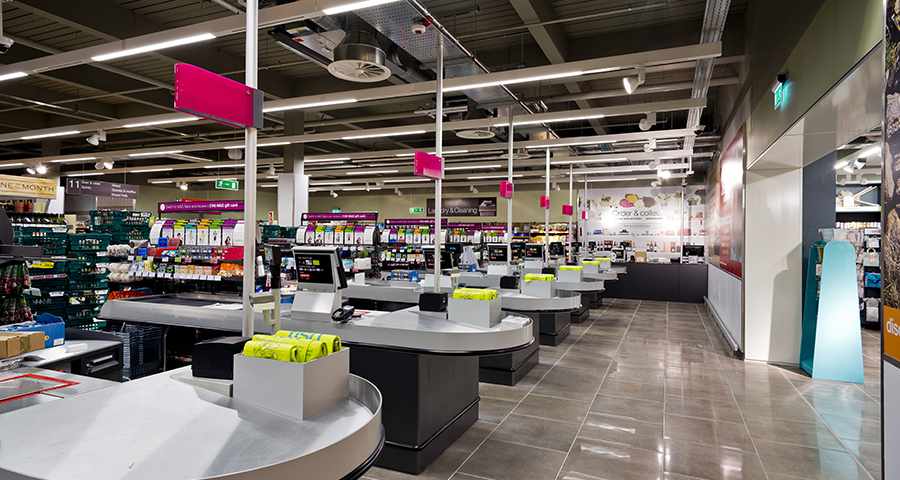 This had been an existing trading unit in a busy retail park on the outskirts of Durham. The unit had been demolished and a new purpose built unit constructed by the developer in preparation for our extensive fit-out works.

The Design & Construct contract commenced on-site on 21st February 2013, with the first task being the laying of the new ceramic tiles to the entire ground floor. Following protection of the new flooring, our team commenced the installation of the escalators, lifts and services for the new food hall.

The contract was supervised by James McQuillan as Contract Manager, Derek McDowell as Services Co-ordinator, David Turtle as Quantity Surveyor, Tommy McCamphill and Johnny Compston as Site Managers, and during the final stages of fit-out our site team was supported by Gerald Brannigan.

Fit-out works included the installation of a 92-seat café along with a 10,700sqft food hall and non-food departments to include home, health & beauty and clothing.

Practical Completion was achieved on Friday 24th May with store training for the M&S staff carried out prior to this.  The much-anticipated store was opened to the public on 16th June and has been trading well above expectations.

The McLaughlin & Harvey team was praised by M&S, the External Project Manager and the new Store Manager for the professionalism of the delivery and the quality of the project handed over.

Additional contracts have been awarded by both M&S and the Centre Management for strip-out works to the existing vacated Simply Food unit on the complex.